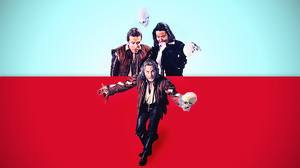 I never studied Shakespeare. I was never an English student or an art student to study it in school or college. Until I started College, I wasn't even conversant enough with the language that I could go ahead and read it on my own and when I did start reading it, that old English was a big turn off for me since I would never understand a line without dictionary by my side. So, until recently, my only Introduction to the world of bard was some interpretations of his works in Indian movies such as Omkara(2006) based on Othello, Maqbool(2003) based on Macbeth and Angoor(1982) based on Comedy of Errors. However, since I did not know the original works, I still do not know if they stay true to it or they deviate and if they do falter, in what capacity they do ? So, until very recently when I found it out that my college library has a lot of versions of Shakespeare's work, I was never properly introduced to the works of this master. I started with Laurence Olivier's Hamlet(1948) which has won numerous Oscars. However, after that I stumbled upon something which I had not planned. After watching Hamlet, one of my co-workers referred me to Rosencrantz are Guildernstern are Dead(1990) and Brad, may you get the best Girlfriend in the world for that (He will probably ask for a beer though or maybe a book).

Rosencrantz are Guildernstern are Dead(1990) (from here on I am going to call it RAGAD because their names not only ridiculously long, it is little complex and I am sure that if I write it 4 times, I will spell them in 4 different ways) tells the Hamlet's Story from the point if view of Rosencrantz And Guildernstern. Those of you who know Hamlet better than me will know that these are the characters King Claudius sends to spy on Hamlet after he starts acting crazy, because they are his childhood friends. Movie follows original Hamlet, picking up the scenes whenever our protagonists are part of in original play until their eventual end where Hamlet changes the letter on the ship to England to give name to this film RAGAD(you got it right?). Whole movie however takes more of a comic path making them Shakespearean Laurel and Hardy. Rosencrantz plays a clumsy,childlike Laurel who will stumble on to the great idea without realizing the importance of it where as Guildernstern is like Hardy, self-proclaimed leader of the pack who will more often than not get in trouble because of his partner's clumsiness. 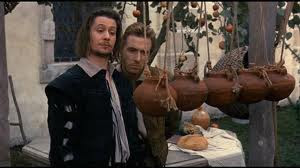 Except for the fact that I was directly told to see it, there were couple of more things that got me interested into RAGAD. First was Cast. Gary Oldman as Rosencrantz and Tim Roth as Guildenstern play the two titular roles. They both play their parts to perfection, confused by all the event happening around them and completely unaware of their role in the big picture - Oldman tad better for providing multiple laughing out loud moments. Richard Dreyfuss is The Player, master of the company called Tragedians which plays 'Murder of Gonzago' in front of King and Queen upon Hamlet's request. Central characters in actual Hamlet, all take back seat to these three here. And the second thing that got me to watch it was the opening scene where our protagonists find a coin on the ground and start tossing it to get almost 160 consecutive heads. It was enough to lure me into watching it. Tom Stoppard is the writer-director at the helm. Though I wasn't conversant with any of his works, quick check revealed him to be Oscar winning screenwriter of Shakespeare in Love(1999), Brazil(1985) and Empire of the Sun(1987). RAGAD seems to be his only directorial effort.

Based on Stoppard's own play, RAGAD relies heavily on the brilliant eloquence of both the leads. Throughout the movie, there is a lot of brilliant word play. Game of questions R and G play with each other and their various encounters with the player are just brilliant and many of them result in lot of laugh out loud moments like
Rosencrantz: Another Curious phenomenon. Finger-nails can grow after your death and so does the beard.
Guildernstern: But you are not dead ?
Rosencrantz: I didn't say they start only after you are dead. Fingernails also grow before the birth, though not the beard. Toenails, on the other hand, never grow at all.
Guildernstern: FOOT. Toenails on the other FOOT never grow at all. (LOL!!)
and whole movie is filled with many such hilarious scenes. On many occasions their nonsensical rambling turn to deeper thoughts like when they are talking about Genearal Relativity and death. Rosencrantz is shown to be inventing Hamburger, Gravity and volume displacement but it never occurs to him mainly because he fails miserably trying to recur the phenomenon for Guildernstern. Once he also makes a biplane rather than normal paper plane only to be crushed by Guildenstern. 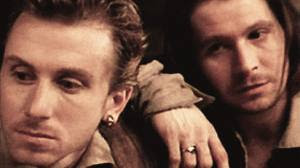 Tom Sheppard has given us a hilarious spin-off on Hamlet without destroying the sanctity of an original classic in any way and some memorable performances by Gary Oldman, Tim Roth and Richard Dreyfuss make it a quite a remarkable movie. Even though it did not add much to my Shakespearean knowledge, or lack of it, I sure had a hell of a time and plenty of laughs.