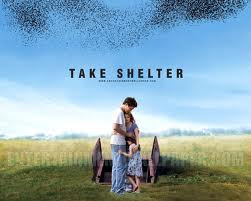 Considering How late I kick-started 2011, it should not come as a shock that I am still clearing up the backlog of 2011. First 2011 movie I saw was Harry Potter 7 Part 2(2011) couple of weeks after release, so somewhere in July and hence I still haven't seen likes of Shame(2011), My week with Merilyn(2011), The Muppets(2011) and Young Adult(2011). I was hoping to catch up with most of them at least before the Oscars but it hasn't been possible to get hold of all of them. So, unless a miracle happens and someone drops all the DVD's by my pillow while I am sleeping, I might have to wait a little longer. But courtesy of RedBox, I caught up with Take Shelter(2011) this weekend, another one of the apocalyptic movies from 2011. There were so many movies last year revolving around similar themes (Melancholia(2011), Another Earth(2011) come to mind immediately) that it seems Hollywood took the Mayan prediction of world ending 2012 a little too seriously.

So, we have Curtis LaForche, played brilliantly by Michael Shannon, young husband and father, construction worker living in small town in Ohio. He is married to Samantha, played equally brilliantly by Jessica Chastain, who is a house-wife and they have a daughter, Hannah who is hearing impaired. They are living in their own paradise, until one day it starts to rain. We see Curtis looking at the Sky as if he can see the end of world, except for the fact that he actually does, even if nobody else can. Various things happening around him make his suspicion stronger - rain water is muddy, birds are flying funny. He soon starts to have nightmares so strong that telling if it is a nightmare or reality becomes difficult. He tries to get a medical help but it doesn't really help him and to make the matters worse, he has a history of Paranoia. But, amidst all this he is sure of one thing that a big storm is coming and no one is ready for it. He puts almost all his money and energy into building a tornado shelter so that his family will have somewhere to go if his premonitions come true. For everyone else around him, his actions hold no ground as they don't see what he does and for them, he is losing it all - it is his slow descent into craziness.

Director Jeff Nichols, in his second project as a director gives us a slow burning thriller - an expression I am sure every reviewer has used to describe this movie. Nichols' most important achievement lies in making Curtis look genuine, authentic. He is not the first one on the silver screen to slowly disintegrate into insanity and he certainly won't be last. But, Nichols takes care of keeping his characters real. Not just Curtis but I will give him credit for Samantha as well. In her, Curtis has a companion who loves him with her whole heart and who is always by his side but who is not afraid to do the right thing when needed to be, even if it means to slap him hard on face. Also, Nichols uses Curtis' dream sequences throughout the movie wonderfully well to build up the mood, making it much horrifying since they work on the psychological level. Now, if I want to find the flaws, I will again say that it is a Slow burning thriller because it may not be everyone's cup of tea. Even in my opinion it ran a little bit longer. It takes a little more run-time than required to get him worse, once his crazy nightmares start and then again till the final conclusion. But just like Melancholia(2011), another apocalyptic movie in 2011, wait for the End !!

I will be honest here and say that I did not know whole lot about Michael Shannon and his filmography before this except Before the Devil Knows You are Dead(2007) and his Oscar nominated performance in Revolutionary Road(2008), which I found out only after I looked him up after all the buzz concerning this role. Now, I can definitely say that he is every bit deserving of the all the buzz and I would have been even happier had he been nominated. Just one scene in the middle of the movie where he actually goes crazy, after his very close friend provokes him should be enough to make a case for him and he does whole lot more than that throughout the movie. His face is probably his best asset and he uses it show variety of emotions with a great result. On the other end is the breakthrough performer of the year - Jessica Chastain who puts another powerful performance. What amazes me is that she has not just been prolific last year with 6 films but I really like the choices she has made. After seeing all the movies she made in 2011(Except Corialanus(2011)), I am having hard time to pick up a best of the lot and can only hope she continues to flourish even more in the years to come.

I know that I am already very much late and most of you must have seen Take Shelter(2011) by now. But, for some reason whatsoever you haven't, let me tell you that you are really missing something great. Go and watch it. It is worth every minute and every cent you spend on it.